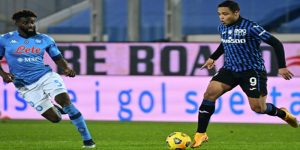 Luis Muriel has moved beyond his ‘super-sub’ role with a rich vein of form to boost Atalanta’s hopes against Real Madrid in the first leg of their last 16 Champions League tie in Bergamo on Wednesday.

Colombian ace Muriel scored and set up countryman Duvan Zapata for another as Atalanta warmed up for the Spanish champions with a 4-2 win over Napoli to move up to fifth in Serie A at the weekend.

“Muriel is extraordinary, not only for the assist and the goal,” said coach Gian Piero Gasperini after the forward scored in a ninth consecutive Serie A appearances as a starter.

“This year he has shown extraordinary mental, physical and athletic form, he has made a terrific leap in quality also in terms of consistency.”

The 29-year-old is having the best campaign of his career with 17 goals so far including two in the Champions League group stages.

He will be keen to impress after a disappointing 18 months at Sevilla, signed from Sampdoria in 2017 as the La Liga side’s most expensive transfer.

He scored 13 goals in 65 games in Spain before returning to Italy on a six-month loan spell with Fiorentina, moving on to Atalanta in mid-2019.

In his debut season, Muriel earned a reputation as a super-sub, scoring 18 Serie A goals despite only starting 10 matches.

This season he has scored 14 league goals, the same as AC Milan star Zlatan Ibrahimovic, and behind Cristiano Ronaldo (18) for Juventus and Inter’s Romelu Lukaku (17).

But while Lukaku and Ronaldo’s goals include four penalties and Ibrahimovic’s three, only one of Muriel’s have been from the spot.

“The coach is giving me space and more playing time lately so I want to make the most of it,” said Muriel, who has scored 36 goals in 71 games for Atalanta.

Gasperini has shaken things up at Atalanta in recent months with emblematic captain Alejandro ‘Papu’ Gomez frozen out after disagreeing with the coach over tactics during a Champions League match.

Gomez was left out of their final Group D game away at Ajax where Muriel scored the winner that sent the Italians through as runners-up behind Liverpool.

Gomez was then sold to Sevilla in January.

The match against 13-time European champions Real will be the biggest game ever played by the Italian team whose only major trophy was the 1963 Coppa Italia.

“If Atalanta play like against Napoli, conceding little and creating a lot, it will be very difficult for them too.”

The Bergamo side have the second best attack in the Italian league behind leaders Inter Milan.

Muriel, Zapata, Robin Gosens and Cristian Romero were all on target at the Gewiss Stadium on Sunday, the sixth time this season the club have scored with four different players.

“This gives us a morale boost before Real Madrid,” warned 63-year-old Gasperini, who has transformed the club into one of the top Italian sides since taking over in 2016.

The northerners reached the quarter-finals in their first Champions League campaign last season, beating Spanish club Valencia in the last 16, and will be hoping to match that achievement again.

“We’re up against the most successful club in the world,” added Gasperini of Zinedine Zidane’s La Liga champions.

“An extraordinary fixture for us. I don’t think Atalanta have ever faced such a team. We’re curious to tackle them to see what we can do.”