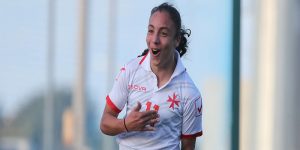 Marked first and foremost by the Covid-19 pandemic, 2020 was a complicated year in many ways. And while the world of football was far from unscathed, it nonetheless witnessed the emergence of a real gem in the 16-year-old Maltese Haley Bugeja.

“It was obviously a difficult year for everyone, but personally it was fantastic,” the Sassuolo resident tells FIFA.com. “I realised a dream I’d been chasing for a long time, which was to embark on professional football career overseas. I’ve played some important games with a team that has confidence in me. And I made some history with Malta. In short, the last 12 months have been almost perfect.”

While Bugeja’s talent has been known about in Malta for some time, it was only revealed to the world last September. Making her Serie A debut against Napoli, she scored two goals, one as magnificent as the other, with the video clip of her exploits quickly going viral.

“I just wanted to repay the faith they’d placed in me. Who wouldn’t dream of scoring a goal on their Serie A debut? So, you can imagine my joy at scoring two, especially since we took all three points, which was the icing on the cake. Obviously, I’ll remember that day for the rest of my life,” she adds.

Not content with that brace, the forward added to her tally by scoring another four goals in 10 matches for US Sassuolo, currently third in Serie A. It is no exaggeration, therefore, to say that the teenage starlet is flourishing in Italy. “Life is fantastic here, and not just because of the quality of the pasta,” she says with a laugh. “The people are very welcoming. I really like it in Italy!”

Life is not supposed to be easy when you are only 16, living away from your family, and your daily routine is more about workouts and training sessions than outings with friends. But Bugeja has adjusted to it: “Invariably you find obstacles in your path and making sacrifices is an inevitable part of the process. You cannot succeed without this. It’s not always easy, but your love for the sport helps you to make sense of it and overcome all the challenges.”

And the word ‘challenge’ takes on a very special meaning when you come from a small island like Malta. Until a few months ago, the women’s national team, who have never qualified for a major tournament, tended to limit their ambition to not losing. But today, boosted by resounding victories in Georgia and Israel, the Reds play to win. “We’re no different from other teams. We’ve all had an inferiority complex at one time or another, but no matter who you’re up against, you need to have self-belief and convince yourself that you’re the best team on the field. Often, winning comes down to having that confidence” insists Bugeja,

Author of five goals in as many appearances with her national team, the teenager carries much of the hopes for a Malta team that was waiting for a star to emerge to help them hit new heights. Fortunately for Malta, Bugeja is not afraid of expectations. “I’ve always used pressure as a source of motivation,” she concludes. “My credo is: ‘Pressure makes diamonds’,”… and she is living proof of that.