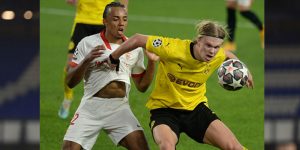 Erling Braut Haaland produced another deadly display of finishing with a first-half brace as Borussia Dortmund came from behind to beat Sevilla 3-2 in Spain in the first leg of their Champions League last-16 tie on Wednesday.

The Norway phenomenon put Dortmund in front in the 27th minute and then scored again two minutes before half-time, the goals taking him to 25 in 24 appearances this season in all competitions.

Still aged just 20, he has scored 18 times in just 13 Champions League appearances since the start of last season.

Substitute Luuk de Jong’s late reply gave Sevilla cause for hope heading into the return leg on March 9, but Dortmund remain favourites to progress to the quarter-finals.

“We didn’t deserve to lose, but in the end they had one of the best players in the world up front and he made the difference in three situations which could have been avoided,” said Sevilla coach Julen Lopetegui.

Haaland, who also set up Dahoud’s equaliser, produced a performance, in the first half at least, which showcased his remarkable strength, hold-up play and pace as well as his brilliant finishing.

It was too much for a Sevilla side who had come into this tie with high hopes, having only been beaten by La Liga leaders Atletico Madrid, away, in their previous 19 outings.

Lopetegui’s team had won their previous nine matches on the bounce and had kept seven straight clean sheets before the arrival of Dortmund and Haaland.

“This was one of our best performances of the season,” Dortmund coach Edin Terzic, who replaced the sacked Lucien Favre after the group phase, told Sky.

“We are pleased with the result and proud to have beaten such a team.”

Sevilla have won the Europa League or its predecessor, the UEFA Cup, an incredible six times since 2005, but only once have they got past the last 16 of the Champions League, when they beat Manchester United in 2018 before losing to Bayern Munich in the quarter-finals.

The quality of Haaland was the difference here as Dortmund, having sunk to sixth in the Bundesliga on a poor run of form, came to life on their return to the Champions League.

“We had a good plan. Edin has been good and I’ve been talking a lot with him. He said today would be my game and that I would get my chances and I did, so it was an important win,” Haaland told DAZN.

Yet the game had started well for Sevilla, with Suso opening the scoring in the seventh minute, his shot deflecting in off Mats Hummels.

Dortmund drew level in the 19th minute as Haaland showed terrific strength to hold the ball up on the right before coming infield and feeding Dahoud, who worked his way into position to fire a superb shot high into net from just outside the area.

It was the first goal Sevilla had conceded in more than 12 hours of football.

Haaland dropped deep, collecting possession near the halfway line, and then turned and charged towards goal, playing a pass to Jadon Sancho on the edge of the box and then continuing on to place the return ball past goalkeeper Yassine Bounou.

He struck again two minutes before half-time, slotting home first-time after Marco Reus had stolen the ball from the feet of Alejandro ‘Papu’ Gomez before bearing down on goal.

However, Sevilla dominated the second half as Dortmund sat back, and the hosts got a potentially crucial second goal six minutes from the end.

Oscar Rodriguez’s high, hanging free-kick was turned into the net by De Jong, giving them something to cling to.