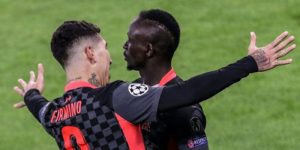 Liverpool seized the initiative against RB Leipzig in the first leg of their Champions League last-16 clash by cruising to a 2-0 win in a chilly Budapest on Tuesday.

Clinical early second-half strikes from Mohamed Salah and Sadio Mane, both courtesy of dreadful defensive errors, proved decisive and leave the German side facing a formidable task in the return leg at Anfield on March 10.

The win moves Jurgen Klopp’s men to the brink of the Champions League quarter-finals and also ends a run of three straight defeats that has left the English champions 13 points behind leaders Manchester City in the Premier League.

The first leg was moved from Leipzig to the Hungarian capital due to Germany’s strict Covid-19 travel restrictions.

Despite the enforced move, Leipzig coach Julian Nagelsmann’s side started briskly and almost went ahead on four minutes.

Marauding left-back Angelino teed up fellow Spaniard Dani Olmo for a close-range diving header past Alisson but the effort only rattled the post.

Soon after Angelino again exploited space on the left but his left-footed volley skewed harmlessly across the goalmouth.

But it was Liverpool, attempting to reverse their slump and badly in need of a Champions League lift, who gradually created more chances, often benefitting from loose defending.

Ten minutes later Mane, outjumping Nordi Mukiele, headed a Firmino cross just over after the Brazilian striker and Salah had combined well on the right.

Shortly before half-time, Andy Robertson shaved the crossbar when his lob from distance almost caught out the Budapest-born Gulacsi dashing back after making a clearance outside his box.

Although Leipzig perked up on the restart with Alisson Becker saving from Christopher Nkunku, the German side, were made to pay for two calamitous mistakes early in the second half.

In the 53rd minute, Salah pounced on a sloppy back-pass by Austrian midfielder Marcel Sabitzer and ran unchallenged to smoothly slot past Gulacsi.

With Swedish playmaker Emil Forsberg sidelined by a knee injury and lacking a talismanic goalscorer, Leipzig looked unlikely to pull one back.

Instead, Liverpool cruised to victory, keeping alive their hopes of silverware via Champions League glory this season.