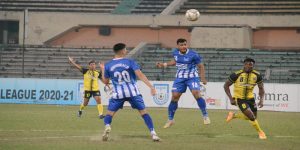 In the day’s match, midfielder Mohammad Abdullah put Sheikh Russel KC ahead in the 20th minute but Saif Sporting Club staged a fight back in the second half with more organized way when defender Riyadul Hasan Rafi restored the parity in the 57th minute of the match.

Uzbekistan midfielder Sirozhiddin Rakhmatullaev sealed the victory scoring the second goal for Saif in the 74th minute of the match.

Saif Sporting Club played good football, especially in the second half, and snatched the victory on the day while Sheikh Russel were off-colored except the day’s only goal.

With the day’s win, Saif Sporting Club improved their tally in the league table with 13 points from seven matches while Sheikh Russel KC remained at their previous credit of 16 points playing eight matches.