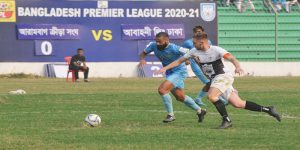 In the day’s match, Brazilian forward Francisco Wagsley struck twice while Afghan defender Masih Saighani and substitute midfielder Dipok Roy supported him with a lone goal each to secure Abahani’s emphatic victory on the day.

Francisco opened an account scoring the first goal for Abahani in the 31st minute while he doubled the lead scoring his second goal in the 43rd minute of the match.

Abahani Limited dominated the entire proceeding and notched their deserving victory while Arambagh KS were totally off-colored on the day.

With the day’s win, Abahani Limited improved their tally with 18 points from eight matches while Arambagh KS yet to open their account playing seven outings.

The six times league champions Abahani will play their next match against Saif Sporting Club while Arambagh KS will meet holders Bashundhara Kings. Both the matches will be held on Tuesday (Feb. 16) at Bangabandhu National Stadium.