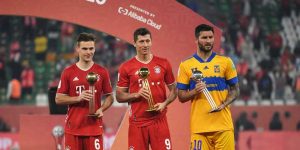 Not only is Lewandowski the best player in the world, he was also the best at the Club World Cup. The Polish striker registered a brace in the 2-0 semi-final win over Al Ahly SC, and it was his header that teed up team-mate Benjamin Pavard to score the only goal of the game in the final against Tigres UANL.

On top of that, the 32-year-old received the Alibaba Cloud Match Award in both games. “We were determined to win,” said a jubilant Lewandowski after the final whistle. “At half-time I said that we need to get crosses into the box, and that’s how the goal arrived. It’s fantastic.”

The forward may not have scored in the final, but his record this season remains astonishing: Lewandowski has averaged 1.03 goals per game (29 in 28 appearances). Yet even that is still some way behind his unbelievable return of 1.17 goals per game last season.