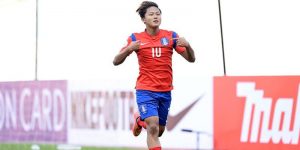 Korea Republic international Lee Seung-woo has joined Portuguese side Portimonense on loan until the end of the season from Belgian club Sint Truiden.

The 23-year-old joins a Portimonense squad with a strong Asian flavour, containing Japanese trio Keisuke Honda, Koki Anzai and Kosuke Nakamura as well as Jafar Salmani from the Islamic Republic of Iran.

Lee, who was a member of the Korea Republic squad that appeared at the 2018 FIFA World Cup Finals and was also a gold medal winner at the 2018 Asian Games in Jakarta, played 13 times this season for Sint Truiden, scoring twice.

Previously on the books of Barcelona, where he came through the club’s La Masia academy, Lee spent two seasons with Hellas Verona in Italy before joining Sint Truiden.

Portimonense, who won Portugal’s second division title in 2017, are currently struggling in the nation’s top flight, where they are 15th in the 18-team league, one point clear of the relegation zone.