Kimmich: Our biggest strengths are our mentality and quality 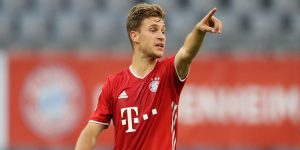 In an August 2016 entry in The Players’ Tribune, Joshua Kimmich tells his story of learning to play football in his parents’ garden in the small German village of Bosingen. Total population? About 1,700.

When one grows up in a small town, there’s not a lot to do, so it’s important to get creative. After breaking too many of his parents’ windows and ruining their plants with stray shots in the garden, Kimmich’s parents got two regulation goals from the local club and instructed him to play with his friends across the street on an open space of land. It was there, where he and his friends built their own “stadium” with makeshift stands, that his dreams started formulating firmly in his head.

Fast-forward over 18 years and Kimmich is one of the most important players on arguably the world’s best team and is preparing for his FIFA Club World Cup™ debut, where he will be playing in stadiums that will be used at the FIFA World Cup Qatar 2022™.

FIFA caught up with Kimmich ahead of Bayern’s semi-final, which coincidentally, will land on his 26th birthday.

FIFA.com: 2020 was a fantastic year for Bayern. What was your favourite moment of the year?

Joshua Kimmich: Of course it was an outstanding year. There were a lot of positive moments, but for me the best moment was winning the Champions League, defeating Paris and knowing that we are the champions now.

There’s a chance you could win a sixth title on the spin. What would it mean to you to win the FIFA Club World Cup?

Now you’re facing teams from different continents. Is there a special motivation to play against them?

It is special because you play against other countries from far away. It is really interesting because it’s not often that you get to play against such teams.

It will be a new stadium for you, too. How much are you looking forward to play in these brand new stadiums, which will also be used in the FIFA World Cup™ in 2022?

It’s always nice to play in new and big stadiums. Fortunately here in Germany we also have really big and nice stadiums but there are no spectators at the moment. This is not that nice, but to play in these stadiums is always a really good feeling.

What do you think is the biggest strength of Bayern Munich right now?

Our biggest strengths are our mentality and our quality. Both are really important and we have both. We have a great mentality in our group. We always want to win, even when we don’t play very well. You can always see that we want to win those types of games. Everyone knows we have a lot of quality in our squad. It doesn’t matter who plays, there is always a world class player in the first 11 and that is a big strength.

You’ve been raising a lot of money with your #WeKickCorona initiative. What does it mean to you?