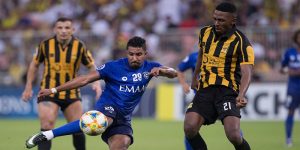 Having taken a look at the domestic rivalries in the United Arab Emirates, the-AFC.com turns its attention to Saudi Arabia in the latest installment.

Saudi Arabia is rich in football history, and the league contains two of Asia’s most successful teams in the AFC Champions League, while competitiveness among the participating clubs have resulted in several derbies coming along since the inception of the league in 1976.

The name gives it all away; this is the derby between the two most successful clubs in the kingdom.

Their fortunes have greatly differed in recent years – Al Hilal usurping their rivals as the most successful Saudi club in Asian club competition while their Jeddah based rivals have been involved in more relegation battles than title run-ins.

Both teams have recorded resounding victories against each other over the years, but Al Hilal’s 5-0 league win in 2009 courtesy of a Thiago Neves hat-trick sandwiched between two Christian Wilhelmsson strikes was the biggest scoreline in the fixture.

On the other hand, the longest streak of consecutive wins for one of the two against the other belongs to the Tigers, when back in 1997 they won the league double, the league final, and the Crown Prince Cup semi-final.

The duo have also met twice in the AFC Champions League, once in a one legged round of 16 tie in 2011 and over two quarter-final legs in 2019.

The Tigers ran out comfortable winners in 2011 with a 3-1 scoreline – the consolation goal for Al Hilal being one of the most exquisite chipped shots.

In 2019 with a semi-final berth on the line, both teams played out a goalless draw in Jeddah and the return leg in Riyadh provided the goals and excitement fans had come to expect from this fixture.

The Tigers went ahead early on through Ziyad Al Sahafi, before goals from Andre Carillo and Salem Al Dawsari either side of the half-time whistle took Al Hilal ahead before Sebastian Giovinco wrapped things up on 78 minutes.

The coastal city of Jeddah holds one of the oldest rivalries in the kingdom between the two time AFC Champions League winners, and their less continentally prominent neighbours.

The rivalry stretches all the way back to the late seventies, and has been an annual fixture of the Saudi top tier ever since.

The derby has been tipped in Al Ahli’s favour during the past decade, having not lost a game to the Tigers since 2016 – a run of six games that has seen The Royals win four and draw two. Before that, there was an equally long undefeated streak for Al Ahli that stretched as far back as 2012.

As far as continental meetings are concerned, the two sides met in the 2012 AFC Champions League semi-final stage. Naif Al Hazazi tapped in to give Al Ittihad the advantage in the first leg.

The Royals overturned the defeat and came out with a 2-0 win in the second leg, despite the Tigers’ goalkeeper Mabrouk Zayed’s series of stunning saves throughout the match.

Not only is it the capital city’s biggest derby, it’s also the rivalry between the Saudi Pro League’s two most successful sides.

With 24 league titles between them, the duo have won just over half of the Saudi Pro League titles since the inception of the competition back in the 1970s.

A fixture that has never taken place in AFC club competitions, it’s one that brings the capital city of Riyadh to a standstill as both sets of fans clamour to either reach the stadium, or gather to watch the match elsewhere.

While the rivalry itself has been constant in terms of sporting competitiveness between both clubs, there have been spells when one team couldn’t beat the other, the longest of which lasted from February 2010 till September 2012 – a run of 10 games undefeated for the Blue Waves against their rivals in which they won eight games.

The largest score in the fixture also went in Al Hilal’s favour, when in May 2017 they came out comfortable 5-1 winners, a game which saw Syrian international Omar Kharbin bag a superb hat-trick.

Al Nassr’s decisive win in the away league fixture in March 2019 saw them turn the tables against their rivals in the title race, courtesy of Bruno Uvini’s dinked header that came deep into stoppage time and sent them top of the table.

They went on to win the league title and most recently, Al Nassr shrugged off a troubled 2020-21 season to defeat Al Hilal 3-0 to lift the Saudi Arabia Super cup title.