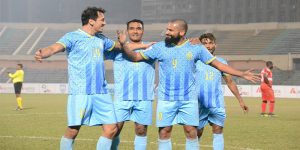 Apart from Saighani’s two goals, midfielder Sohel Rana and Dipok Roy supported him with one goal each to secure Abahani’s fourth win in the league after leading the first half by 2-0 goals while striker Sorower Zaman Nipu scored the lone goal for Muktijoddha Sangsad KC.

In the day’s match, Saighani opened an account for Abahani early in the 15th minute while Sohel Rana doubled the lead scoring the second goal for Abahani in the 45+1st minute of the match.

After resumption, Saighani further widened the Abahani’s margin scoring his second and third for his team in the 53rd minute while Nipu reduced the margin scoring the lone goal for Muktis in the 67th minute of the match.

Midfielder Dipok Roy sealed the victory scoring the fourth goal for Abahani in the 76th minute of the match.

With the day’s win, Abahani Limited again joined the second position in the league table with 14 points from six matches while the freedom fighters remained at their previous collection of three points from five outings.

Abahani Limited will play their next match against Lieutenant Sheikh Jamal Dhanmondi Club scheduled to be held on Tuesday (Feb.9) at BNS after Muktijoddha Sangsad KC will play against holders Bashundhara Kings on Monday (Feb 8) at Shaheed Dhirendranath Stadium in Comilla.

Earlier, Abahani Limited, Dhaka made a winning start in the league beating Bangladesh Police Football Club by 1-0 goal in their opening league match, outclassed Brothers Union Club by 2-0 goals in their second match, edged past Rahmatganj Muslim and Friends Society by 1-0 in the third match, played out to a 2-2 goals draw with arch-rival
Mohammedan Sporting Club in the fourth match and split point with Chittagong Abahani Limited playing out to a 1-1 goal draw in the fifth match of the league.