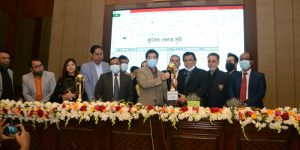 A total of 63 football teams from 75 wards of Dhaka South City Corporation (DSCC) will take part in the first edition of Inter-Ward Sports Competition starting from the 10th of February at several city venues.

The inaugural match will be played at Bangabandhu National Stadium, Dhaka. The month-long competition will be held in the knockout system.

The champions and runners-up teams will receive Taka 500,000 and Taka 300,000 correspondingly as cash prize. The best sports person of the competition will be awarded Taka 20,000.

In this regard, a press conference was held at Nagar Bhaban, Fulbaria, Dhaka on Thursday. DSCC Mayor Sheikh Fazle Noor Taposh, Bangladesh Football Federation President Kazi M Salahuddin along with city’s ward representatives were present there.