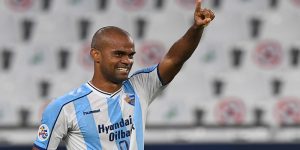 Junior Negrao’s successful three-year stint with 2020 AFC Champions League winners Ulsan Hyundai has come to an end, the club announced on Thursday as the Brazilian confirmed his departure from the K League side.

The forward scored seven times in Ulsan’s successful AFC Champions League campaign last year – including twice in the final – as the club claimed the continental title for the second time in their history with victory over Islamic Republic of Iran’s Persepolis FC in the decider in Doha in December.

“I have been here for three years but now it’s time to say goodbye,” Junior said in a video released on Ulsan’s Facebook account. “I want to say thank you to everyone who worked with me here.

“I made a lot of good friends here and I just want to say thank you to all the fans who gave me a lot of love from the beginning. But now I have to change, I need to change.

unior joined Ulsan ahead of the 2018 season after a successful one-year spell with Daegu FC, where he scored 12 times in 16 games.

But he made a significant impact at Ulsan, netting 27 times in 39 games in all competitions in his first season before adding 22 goals in 43 games in 2019.

In 2020 he stepped up to another level, however, finishing as the K League’s leading scorer with 26 goals in 27 games and scoring 35 times in 41 games in all competitions as Ulsan won the AFC Champions League and finished as runners-up in both the league and the Korean FA Cup.

The highlight came in the final of the AFC Champions League when Junior cancelled out Mehdi Abdi Qara’s opener to level the scores for Ulsan in first half injury time before converting from the penalty spot 10 minutes into the second half to earn his club the title for the first time since 2012.

Speculation has been rife since the end of the year that Brazilian would leave the Asian champions, with the Chinese Super League the most likely next destination for the talented 34-year-old.