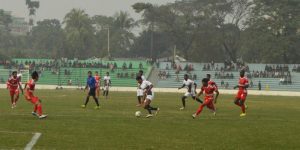 The match on the day saw a barren first half while the second half became interesting with Royal’s goal in the 48th minute. Losing the match was enough bad news for Arambagh boys on the day and to add more bad feeling to that a red card was handed to their Assistant Coach Chandan Balbir Rathod by referee SM Jasim Akhter for unjustifiable deed.

When the all reds were cheering their win against Arambagh in Munshiganj, Mohammedan Sporting Club and Sheikh Russel Krira Chakra had to stay pleased with a 1-1 tie at Bangabandhu National Stadium in Dhaka.

The traditional black and white jerseys cheered following a Mali striker Souleymane Diabate’s goal in the injury time of the first half. But their smile didn’t last long as Brazil striker Giancarlo Lopes Rodrigues equalised the margin for the Russel boys in the 56th minute. It can be said that the Brazilian didn’t let Mohammedan win the match as the black and white outfits were not able to break the deadlock before the long whistle.

After a two-day break, the league will resume with three matches on Wednesday. Uttar Baridhara and Brothers Union will meet at 3:00 pm at Shaheed Ahsan Ullah Master Stadium, Tangi. Sheikh Jamal Dhanmondi Club and Arambagh Krira Sangha will play at 3:30 pm and Rahmatganj Muslim Friends Society and Bashundhara Kings will engage at 6:00 pm at BNS, Dhaka.