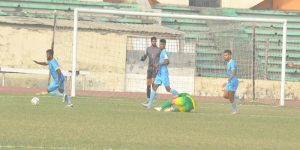 Dhaka Abahani won over Rahmatganj Muslim Friends Society in a 1-0 match in Bangladesh Premier League on Saturday where substitute striker Jewel Rana presented the team with a 79-minute goal at BNS, Dhaka.

It was the third consecutive win of Dhaka Abahani in the league while for Rahmatganj, it was the second defeat in a row.

Jewel had scored for the team in previous matches of Federation Cup as well. Though he was not in the main XI of the team on Saturday, the substitute striker gave his best after coming down the ground in the second half along with a fellow defender Raihan Hasan.

After the barren first half, Abahnai’s Portuguese coach Mário Lemos sent the two onto the ground. They literally changed the scenario of the game and piled pressure on the opponent. Yet the match winning goal was scored in the 79th minute. Haitian booter Kervens Belfort amazingly back headed a long-through of Raihan to Jewel in the small box who too nicely sent it home with a header.

When the Abahani boys were celebrating their third win in Dhaka, Bashundhar Kings boys were too having a good time winning over Brother Union by 1-0 at their home venue Cumilla stadium.