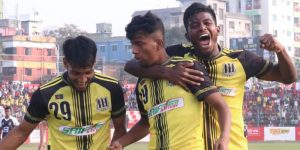 In the match at Shaheed Dhirendranath Datta Stadium, both the opponents played at the same level yet the traditional black and white outfits failed to make it their day in the end Mohammedan began the league in a good mood with a 3-0 win over Arambagh Krira Sangha on 17th January in Dhaka. But it cannot continue the winning way in the second match.

The two had engaged in the quarterfinals of Federation Cup few days back where both were neck and neck and the regular time saw a 2-2 draw yet the black and white jerseys lost the rivalry by 6-7 in sudden death afterwards. Now, losing again to the same opponents by a single goal was pathetic, especially when the match was played at their home venue. In the match, Saif took the lead in the 44th minute following a goal of midfielder Arifur Rahman.

The team doubled the lead in the 47th minute with a goal of Nigerian striker John Okoli. Although Japanese midfielder Uryu Nagata had reduced the margin for the host by a single goal, the MSC boys could not level the margin till the end.

On the other hand, a 30-minute goal of Brazilian striker Nixon Guylherme Rocha Brizolara was enough for Chittagong Abahani to win over Arambagh Krira Sangha in the other match of the league at BNS, Dhaka on the day.

After a break on Friday, the league is recommencing on Saturday. Bashundhara Kings will face Brothers Union in Cumilla at 3:00 pm. Dhaka Abahani will meet Rahmatganj MFS at 3:00 pm and Bangladesh Police FC and Uttar Baridhara will engage at 6:00 pm in Dhaka.