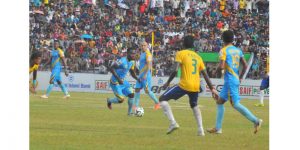 Chittagong Abahani will take on Sheikh Jamal Dhanmondi Club in Bangladesh Premier League (BPL) on Monday at 4:00 pm at Bangabandhu National Stadium. For the last time, these two met in a match of abandoned 2019-20 BPL in February last year where the port city team blanked the opponent by 2-0 margin.

In 2018-19 BPL, the played a goalless draw in the first leg while the Jamal boys had a 2-0 win over the opponent in the second leg. Nevertheless the past and present situations are different. The two didn’t have the chance to meet each other this season till Monday. Both the opponents were in different groups in the season opening Federation Cup and then the Dhanmondi boys were already eliminated from the group stage while, on the contrary, Chittagong Abahani made it to the semi-finals.

Reading the recent results, it can be said that the big team of Dhanmondi had certainly failed to begin the season in a good mode. But the fans will definitely wait to see what the disciples of eloquent coach Shafiqul Islam Manik do in the B-League. The Abahani club of port city, on the other hand, already played against Saif Sporting Club, on of the stronger sides of the league, in the Federation Cup where they lost the battle by 3-0 but gave a good fight. So the Monday match is likely to be interesting and as the BPL matches are returning to the 4:00 – 6:00 pm slot with the match, it may attract spectators as well.