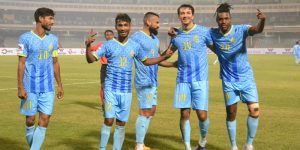 Riding on a lone goal of Haitian striker Kervens Fils Belfort, Dhaka Abahani found a 1-0 win against Bangladesh Police Football Club in its first match of Bangladesh Premier League on Thursday. Though the famous sky blue outfits won the match it was not an easy thing to attain especially when the opponents were highly defensive. The defensive Police team made it almost impossible for the Abahani boys to score until Haiti striker Kervens Fils Belfort succeeded to penetrate their defence line in the 86th minute and netted the match winning goal. The sky blue outfits were eliminated from the semis of the lately finished Federation Cup. After failing to do well in the season opening event, it is not unusual to expect the powerful team from Dhaka would like to begin and do well in the top tier league. But struggling against Lankan coach Pakir Ali’s Police team indicated that they would need more to do well in the coming matches. All knows that the league is a long voyage and it will take the best efforts to stay top on the table. Dhaka Abahani is still the most successful team of BPL after the professional league was initiated in 2007. The club clinched six champion trophies and two runner-up trophies. On Friday, Sheikh Russel Krira Chakra and Brothers Union will begin their league journey engaging in the third match of the league at 8:00 PM.