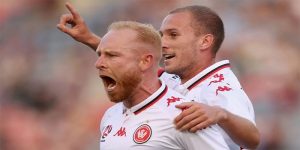 Western Sydney Wanderers recorded their first three points in the A-League 2020-21 season, while Macarthur had to settle for a draw against 10-man Wellington Phoenix.

Western Sydney Wanderers picked up their first win of the campaign after beating Newcastle Jets 2-1 on Friday.

Ziggy Gordon broke the deadlock as early as the seventh minute, before Tate Russell doubled their advantage in the 57th.

Newcastle Jets gave themselves a glimmer of hope through Nigel Boogaard’s effort in the 73rd minute but it was too little too late as Western Sydney Wanderers walked away with the points.

The result was a morale booster for Western Sydney Wanderers, who had opened their campaign with a 1-0 loss to Macarthur. They play leaders Central Coast Mariners next on January 19.

Macarthur, meanwhile, settled for a 1-1 draw with Wellington Phoenix over the weekend. David Ball found the back of the net for Wellington just minutes before the half-time break.

Wellington suffered a setback near the hour-mark when Alex Rufer was shown a direct red card, and Macarthur quickly capitalised on the situation with Markel Susaeta equalising in the 67th minute.