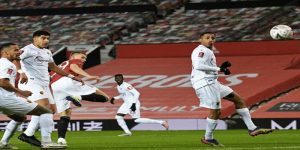 Scott McTominay celebrated captaining Manchester United for the first time by scoring the only goal in a 1-0 FA Cup third-round victory against Watford on Saturday.

Scott McTominay celebrated captaining Manchester United for the first time by scoring the only goal in a 1-0 FA Cup third-round victory against Watford on Saturday. Ole Gunnar Solskjaer made nine changes to his team, who could go top of the Premier League on Tuesday, when they take on Burnley.

The home side started strongly at an empty Old Trafford, with Daniel James impressive on the left side of the attack, and were rewarded when McTominay gave them the lead in the fifth minute.

The Scotland international, who recently scored two early goals against Leeds, headed downwards from an Alex Telles corner and the ball went in off the post.

But McTominay’s header proved the only goal of a first half in which Watford threatened intermittently. Adam Masina’s effort was blocked by a mixture of United goalkeeper Dean Henderson and Axel Tuanzebe.

The opening period ended with United defender Eric Bailly being replaced by Harry Maguire after he was clattered by team-mate Henderson.

The second half at Old Trafford was dull and uneventful, with Watford failing to create clear-cut chances to threaten.

Solskjaer threw on Marcus Rashford and Anthony Martial with just over 20 minutes to go but United were unable to extend their lead.

“The most important thing in the cup is that you go through, so that will make everyone happy, but the first 15-20 minutes I think were the highlights of our game, Solskjaer told the BBC.

“I think we played some very good stuff, created chances and then we let them back into the game but we are through.”

He said the multiple changes allowed his fringe players to make a case for themselves and achieve match fitness.

“We will need all of them over the season and that was part of the reason we made changes,” he added.