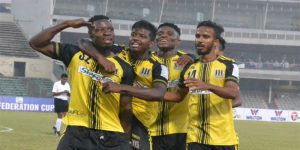 The pre-match briefing on the final match of Federation Cup was held in absence of any representing booter of first time finalist Saif Sporting Club on Saturday.

None of the booter of Saif SC, neither the skipper nor any vital player, came to attend the briefing. Only Saif SC Club General Secretary Mahbubur Rahman and Team Manager Obayedur Rahman were present on behalf of the club.

It is an official norm that the officials and coaches along with team skipper or a key player will attend press briefing to inform about their preparation, expectation regarding an event or match.

Team Manager Obayedur Rahman said, “We had a practice this morning. We do not have our own ground. We share the ground with other teams and we are not able to use the practice ground as like as we want. That’s why we could not change our practice schedule or bring any player here.”

However the briefing was held at 12:00 PM and the club could send an available player to attend the briefing by the time.

BFF General Secretary Abu Nayeem Shohag said, “A high official of Saif assured us earlier that they would at least send a key player in the briefing. This is a violation of rule and it will be brought into BFF disciplinary committee.”