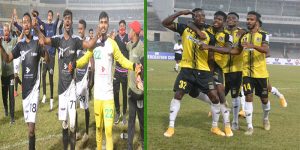 Defending champion Bashundhara Kings is hoping to keep the trophy of Federation Cup while first time finalist Saif Sporting Club is hopeful of holding the trophy for the first time. The two expressed their desires in a briefing on Saturday ahead of the final scheduled for Sunday.

The exciting final match of Walton Federation Cup football is rolling at 4:00 pm on the day at Bangabandhu National Stadium.

While the defending champions want to keep the title, newbie finalist Saif boys are dreaming of lifting their first trophy of any local football event.
Before now, Bashundhara played final twice, in the seasons 2018 and 2019-20. It became runner-up in the first try and clinched the trophy in the second time. Saif boys, on the other hand, are playing final of any local football event for the first time in the history.

Earlier, Bashundhara moved to the final of the event for the third consecutive time defeating Dhaka Abahani by 3-1 margin in the second semi-final match on Thursday. Saif stormed into the final booking a 3-0 win over Chittagong Abahani on Wednesday.

During their last encounter with Saif in BPL in 2019, Bashundhara won the match by 2-0.

Aheda of the final, Bashundhara coach Oscar Bruzon said, “We are taking preparation for the final. We practised in the morning (Saturday). The players had gone through recovery session after the last match. We have put emphasis on the recovery. We want to play well and win the trophy.”

While he was asked about the favourite team in the final,this former defensive midfielder said, “This topic is for you guys (media), for us it’s a game. We want to play a beautiful game tomorrow (Sunday) and we want to win the Federation Cup.”

The champion team will get Taka 500,000 and runner-up Taka 300,000 as cash prize. Besides, the winners of the Federation Cup trophy will have chance to play the upcoming AFC Cup play-off.