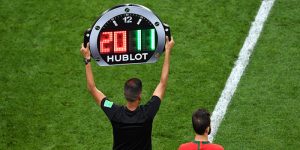 FIFA has today confirmed that it will trial additional permanent substitutions for cases of actual or suspected concussion at the FIFA Club World Cup™, which is due to take place in Qatar from 1 to 11 February 2021, thus becoming the first international competition to test the procedure.

Following FIFA’s input and extensive consultation with key stakeholders, the protocols for concussion substitutes had been approved at The IFAB’s Annual Business Meeting (ABM) in December 2020 with a view to:

In line with The IFAB’s circular no. 21, FIFA will implement a protocol in which each team will be permitted to use a maximum of one concussion substitute in a match; this substitution will be able to be made regardless of the number of substitutes already used.

The trial of concussion substitutes will be applied in conjunction with the competition regulations and the return-to-sport strategy outlined in the Sport Concussion Assessment Tool (SCAT 5).

Teams participating in the FIFA Club World Cup will be allowed to make up to five normal substitutions per game. To avoid disruption to the game, each team will only have three opportunities to make substitutions; substitutions may also be made at half-time.

The temporary amendment to Law 3 – The Players to this effect was originally introduced by The IFAB in May 2020 based on a proposal received from FIFA seeking to protect player welfare. Extensions of the amendment were recently approved at The IFAB’s ABM.

The FIFA Club World Cup match schedule is available here. The draw to finalise the detailed pairings will take place on 19 January at 16:00 CET in Zurich.

In light of the COVID-19 pandemic, FIFA and the host country will provide the required safeguards to protect the health and safety of all involved in the competition, including the full implementation of FIFA’s Return to Football – International Match Protocol.