No room for complacency as Atletico’s rivals find their rhythm 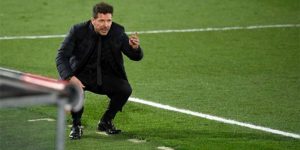 Real Madrid have hit their stride and Barcelona are gaining momentum but Atletico Madrid have stayed strong at the top of La Liga, ahead of what could prove a crucial month in the title race.

A surprise loss to third division side Cornella in the Copa del Rey on Wednesday came in stark contrast to Atletico’s form in the league, where only defeat to their capital city rivals last month blots an otherwise perfect run
of results that stretches back to mid-October.

Two narrow victories over Getafe and Alaves last week made it four league victories on the bounce since Atletico’s setback at the Alfredo di Stefano stadium, where a hesitant, passive performance offered Madrid reassurance.

Atletico had caved when it mattered most and many thought that spelled danger for their prospects longer-term.

But while Zinedine Zidane’s Madrid have used the derby victory to string together an unbeaten run of eight games, seven of them wins and five with clean sheets, Atletico have also responded.

Luis Suarez scored consecutive winners against Getafe and Alaves, his tap- in at Mendizorroza on Sunday prompting the kind of celebrations to suggest his team genuinely believes they can go the distance.

“We have to keep going down this path,” said coach Diego Simeone. “The league is complex, there are lots of traps and you have to be constantly prepared, you can’t let yourselves relax.”

When Madrid last put together a run like this, it was to secure last season’s title, as Barcelona wilted with the trophy in sight.

Yet Atletico have marched on, even if the last-gasp nature of their win against Alaves, coupled with Wednesday’s defeat by Cornella, means there can be no room for complacency this weekend.

“Everyone wants to win and in the second half of the season there is no longer the same calmness,” Simeone said. “It will be tougher, with teams fighting to save themselves, to qualify for Europe. You have to stay alert.” – ‘Always a chance’ –

Atletico face Athletic Bilbao on Saturday and then Sevilla on Tuesday, two tough games that will again test their mettle, especially as Bilbao will be eager to secure a first win under new coach Marcelino Garcia Toral.

Madrid, in contrast, have what appears to be a kind period in front of them. Their next six matches are all against teams currently in the bottom seven of the table, starting at Osasuna on Saturday.

When they lost away at Shakhtar Donestsk at the start of December, Zidane was back in the firing line but the Frenchman has reverted to his most trusted players and his side have quickly recovered.

Barcelona look rejuvenated too, their 3-2 win over Athletic Bilbao on Wednesday coming after a scintillating performance from Lionel Messi.

He scored twice and could have had a hat-trick while the likes of Ousmane Dembele, Pedri, Antoine Griezmann and Frenkie de Jong all contributed to a slick attacking display.

It was also enough to rekindle their hope, even if a seven-point deficit behind Atletico, who have two games in hand on both the Catalans and Madrid, still looks a large gap to close.

“There is always a chance,” said Koeman. “The season is very long. You can have ups and downs in a season and it may be that a team that is doing very well will suddenly find it difficult.”

If Barca can win away at Granada on Saturday, belief will grow. Madrid travel to Osasuna later on Saturday night. Earlier in the day, Sevilla, in sixth, face Real Sociedad in fourth.