Bashundhara Kings in final for the third time in a row 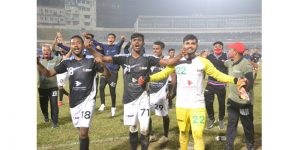 Defending champion Bashundhara Kings moved to the final of Federation Cup football for the third consecutive time defeating Dhaka Abahani by 3-1 margin in the second semifinal match on Thursday.

Previously, Bashundhara played final twice, in the seasons 2018 and 2019-20. It became runner-up in the first time and clinched the trophy in the second time.

Winning the match against Dhaka Abahani, the Bashundhara team is set to play the final against Saif Sporting Club.

In the match on Thursday, Abahani found the net in the 31st minute. Receiving the ball from striker Belfort Kervens, Brazilian striker Francisco Wagsley Rodrigues carried the ball into the danger zone and hit the net with a weak shot.

Bashundhara succeeded in holding the opponent back in the 51st minute. Brazilian midfielder Jonathan Da Silveira Farnandes Reis curved the ball after breaking into the box and the ball bounced back touching the goal line while his Brazilian friend midfielder Raul Oscar Becerra headed the ball down into the post to made the goal certain.

The rest of the stipulated time didn’t see any more goal and eventually the tie match rolled for a 30 minute extra time.

In the 110th minute of the match, Abahani went to back foot as Bashundhara midfielder Matin Miah carried the ball from the right side and passed that to striker Raul who didn’t miss the post.

A minute before the long whistle, Abahani’s striker Belfort found the net yet an offside was occured for which it was not counted and the sky blue jerseys picked a quarrel with the lineman afterwards. The match was stopped for a while.

Now, Bashundhara and Saif boys will be playing the final on Sunday.