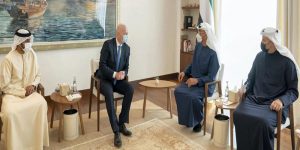 The promotion and advancement of Emirati football, the game’s role in consolidating the values of tolerance and cooperation, as well as the most important challenges and difficulties faced by event and competition organisers in light of the coronavirus pandemic, were among the topics discussed.

The FIFA President also lauded the UAE’s keenness to host events that bring together sports stars, fans and stakeholders from different countries of the world, to discuss ways to develop the sport.