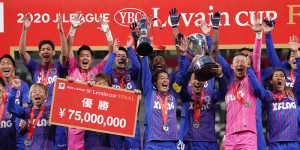 FC Tokyo claimed their first major trophy in nine years with a 2-1 win over Kashiwa Reysol in Monday’s J. League Cup final, bringing the 2020 J. League season to an explosive finish through goals by Brazilian attackers Leandro and Adailton.

The result ended Kenta Hasegawa’s wait for a title, with the Tokyo head coach having made his side into a potent force albeit without a trophy to show since taking over three years ago.

The game took place in front of a sold-out crowd of 24,219 with the physically distanced spectators filling out the three levels of the National Stadium that is scheduled to serve as the centerpiece of the 2020 Tokyo Olympics later this year.

After enduring a grueling campaign that saw the team play many of their November and December league fixtures early in order to play in the 2020 AFC Champions League, Tokyo entered the final without three key players — talismanic striker Diego Oliveira, attacking midfielder Kyosuke Tagawa and central midfielder Yojiro Takahagi.

“There were a lot of players who couldn’t be here today and we wanted to win for them,” said Leandro, who was named the tournament’s most valuable player, to the Japan Times.

Tokyo talisman Leandro sent the south end of the stadium into a brief frenzy when he cut in and snuck a right-footed shot just inside the far post in the 16th minute.

Kashiwa drew level just before half-time when Tokyo goalkeeper Go Hatano — blocked partially by Reysol captain Hidekazu Otani — miffed his attempt to punch out the ball on a set play, with Kashiwa midfielder Yusuke Segawa sliding in to score from close range.

Defender Takumi Ominami came close for Reysol in the 59th minute whileLeandro narrowly missed a chance to put Tokyo back ahead in the 66th minute after his free-kick from just outside the penalty arc struck the crossbar before heading out of bounds.

An attack-minded substitution made shortly after by Hasegawa paid off minutes later when Adailton, who relieved Tokyo captain Keigo Higashi, floated a shot past Kim Seung-gyu to give Tokyo the 2-1 lead and ultimately, the title.