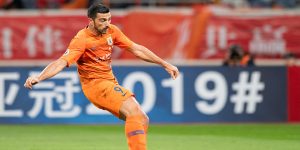 The 35-year-old striker ended his four-and-a-half year stint with the Chinese Super League side after deciding not to sign a contract extension with the club.

Pelle signed for Shandong in 2016 from English Premier League side Southampton, and went on to score 63 goals in 132 appearances, including six in the AFC Champions League where they reached the Round of 16 in 2019.

He was part of the side that defeated Jiangsu Suning in the final of the Chinese FA Cup last month as Shandong denied the Chinese Super League winners the opportunity of completing the league-and-cup double.

“Thanks so much for everything,” said Pelle on his social media account. “Hard to explain the strong attachment and amazing feelings we’ve been through together in these years.

“I’ll never forget all the amazing people I’ve met and helped me during this great experience.

“Thanks to the lovely fans and to all members of the Shandong Luneng club. All of you left a big memory in my soul. Love you all and you’ll be in my heart forever.”