Palestine to play Kuwait in friendly 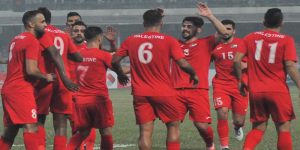 Palestine will face Kuwait in an international friendly on January 18 in Kuwait, the Palestine Football Association has announced.

The friendly will serve as preparation for the two sides ahead of the resumption of the Asian Qualifiers for the FIFA World Cup Qatar 2022 and AFC Asian Cup China 2023.

Palestine are scheduled to host Singapore in Group D of the Asian Qualifiers on March 25 while Kuwait will travel to Australia for Group B action.

Palestine are currently bottom of Group D standing with four points while Kuwait are second in Group B on ten points, two behind Australia.

Palestine head coach Noureddine Ould Ali has called up 24 players for a 10-day training camp in Jericho from Tuesday.