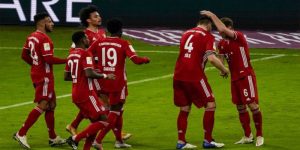 Germany’s top clubs managed to mostly avoid each other in Sunday’s German Cup, last 16 draw with just two all-Bundesliga ties in Schalke away to Wolfsburg and Stuttgart hosting Moenchengladbach.

Should European champions and German Cup holders Bayern Munich beat Holstein Kiel in their second-round tie, postponed to January 13, they will face another second division side in Darmstadt on February 2 or 3.

Likewise, the winner of Bayer Leverkusen against Eintracht Frankfurt on January 12, also postponed from December, is away to Rot-Weiss Essen, the only remaining fourth-tier team.

The quarter-finals are scheduled to be held in early March with the final at Berlin’s Olympic Stadium on May 13.