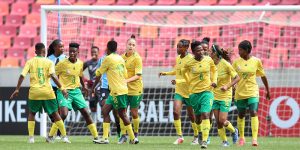 From 3 to 14 November 2020, the COSAFA senior and U-17 Women’s Football Championships were held in Nelson Mandela Bay in South Africa. Confirming the continued growth of women’s football in the South African region, the tournament allowed the multitude of female talent from the region to shine.

Created in 2002 by COSAFA and held annually since 2017, the competitions have grown in popularity with sponsors and football fans originating from the neighbouring countries, as well as giving players the opportunity to showcase their talent and represent their nation’s colours.

This year, the challenges football has faced because of the global pandemic almost resulted in both tournaments being postponed until next year.

Thanks to the financial support of FIFA and its Forward development programme, COSAFA was nevertheless able to face the situation and maintain the progress of its flagship competitions with no less than nine participating teams this year in the senior tournament including Angola, Botswana, Comoros, Eswatini, Lesotho, Malawi, South Africa, Tanzania (invited), Zambia and Zimbabwe.

Observing the health protocols in place due to Covid-19, all players had to follow strict guidelines and take an official test in order to take part in the tournament.

For Fran Hilton-Smith, former SAFA technical director, the organisation of such competitions is paramount: “Thanks to tournaments like those sponsored by FIFA and COSAFA, girls are able to show their skills, hone them and become much better so they can compete at a higher level.”

At the end of the competition, South Africa emerged as winners for the senior women’s tournament with a 2-1 victory over Botswana in the final held at Nelson Mandela Bay Stadium.

For the youth tournaments, Tanzania were crowned champions of the COSAFA Women’s U-17 Championship after a dramatic penalty shoot-out win over Zambia in the final.

“The game is the best teacher, […] unlike in the past, the girls now get an opportunity to compete against their peers and showcase their talents, they can only get better,” said Desiree Ellis, Head Coach of South Africa’s women’s national team.

“FIFA Forward has enabled us to be able to host many similar youth women’s competitions in the region. We are probably the only region in the world that was able to organise such a competition during the pandemic,” added Timothy Shongwe, COSAFA Competitions Committee Chairperson.

For all participants, the main objective from now on will be to continue improving their game in order to inspire a new generation of women and girls in Africa.

“It is incredible to be playing with girls from all over the region knowing that they share the same passion. I think that it’s fantastic COSAFA and FIFA allow girls to play more games and get more exposure. We can only grow from here,” shared Jessica Wade, South Africa U-17 national team captain.

To conclude, Sue Destombes shared her positive thoughts about the next steps: “The future looks bright, and it does start with the national associations utilising the resources that were given to them by FIFA.”