Muktijoddha’s do or die match tomorrow 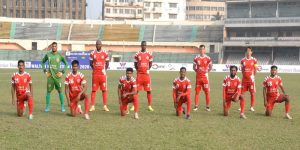 It will be a do or die match for the Muktijoddha to stay in the competition race following their 1-4 goal defeat to Mohammedan Sporting Club Limited in their group opening match.

The freedom fighters must have to win against Abahani with better margin. If they lose the match, they will be eliminated from the competition race.

On the other hand, Abahani have a good chance to become group champions following their first match victory against their arch-rival Mohammedan Sporting Club Limited, which beat the freedom fighters 4-1 in their last group match.

The sky blue Dhanmondi outfit must take to the field tomorrow with an aim to emerge group champions.

In the day’s second match, Sheikh Russel Krira Chakra will face Sheikh Jamal Dhanmondi Club in the last group A match that begins at 5.45 pm at the same venue.

Sheikh Russel Krira Chakra already in comfortable position with a 1-0 victory over Bangladesh Police Football Club in their group opening match while Sheikh Jamal lost their valuable points playing to a 2-2 goal draw with Bangladesh Police Football Club. Sheikh Jamal now needed only one point against Sheikh Russel to confirm their spot in the quarterfinal.

On the other hand, Sheikh Russel has a good chance to become group champions if they are able to beat Sheikh Jamal Dhanmondi Club in their last group match tomorrow. BSS.