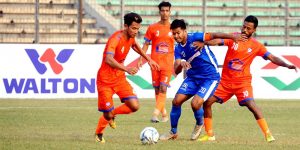 Gopibagh’s Brothers Union had an early exit from the ongoing Federation Cup football losing the second match of the group to Uttar Baridhara by 3-0 on Tuesday at Bangabandhu National Stadium, Dhaka.

Earlier, Brothers Union, the three-time champion of the event had a bad start losing it’s first match against Arambagh Krira Sangha by 2-0 on the 23rd of December. As a result they were eliminated from the group stage.

In the match on Tuesday, Baridhara’s Uzbekistan midfielder Evgeniy Kochnev succeeded in opening the net in the 13rd minute. Local striker Sumon Reza, who recently got chance into national team, doubled the lead in the 26th minute.

Their Egyptian defender Mahmoud Sayed hit the net in the 60th minute to seal the 3-0 match.

Now, Bangladesh Muktijoddha Sangsad Krira Chakra and Dhaka Abahani will face off Wednesday in a Group-D match at 3:15 PM while Sheikh Jamal Dhanmondi Club and Sheikh Russel Krira Chakra will meet in a Group-A match at 5:45 PM at the same venue.

With these matches, the group round of the event will be closed. Private TV channel T-Sports will telecast the matches live.