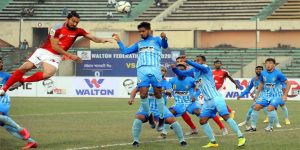 The Defending champion of Federation Cup Bashundhara Kings had became the Group-C champion after winning a 1-0 match against Chittagong Abahani in the Federation Cup on Monday at Bangabandhu National Stadium, Dhaka.

Despite losing the match, the Chattogram team became group runner-up.

The Monday match was only a group top decider as both of these were already in the quarterfinals eliminating Old Dhaka club Rahmatganj Muslim Friends Society from the group. Rahmatganj boys were defeated in both of their group matches.

Bashundhara boys had almost tooken the lead in the 44th minute when their energetic striker Mahbubur Rahman Shufil fooled a marker and advanced towards the box yet was intercepted by the custodian right before taking the shot.

Bashundhara went ahead in the 52nd minute of the match when Argentine striker Raul Oscar Becerra headed on a corner shot of Brazilian striker Robson Azevedo Da Silva to fire the post. In reality, on the day, the Chattogram boys went down due to their custodian M Nayem’s failure in intercepting the flight timely.

Apart from a few more failed attempts, the rest of the match was uneventful.

Now, Brothers Union and Uttar Baridhara from Group- B will engage in the first match today (Tuesday) at 3:15 PM while Saif Sporting Club and Arambagh Krira Sangha from the same group will meet in the second match at 5:45 PM at the same venue.