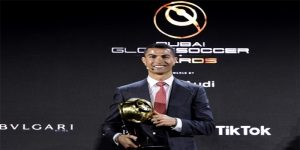 Juventus forward Cristiano Ronaldo beat Lionel Messi, Ronaldinho and Mohamed Salah to be named as the ‘Player of the Century’ at the 2020 Globe Soccer Awards.

The 35-year-old, who won five Champions League titles, three Premier Leagues with Manchester United and two LaLiga titles with Real Madrid and as well as the Nations League with Portugal, was deemed to be the best player between 2001 and 2020 by votes from fans around the world and a jury of 25 including players and former coaches.

“It’s a pleasure to win titles,” said Ronaldo, a five-time Ballon d’Or winner, at the event.

“It’s not easy to be at the top of the game for so many years. I am really proud, but without a team, great coaches and clubs it is not possible.”

Ronaldo picked up the award in person at a ceremony held at the Armani Hotel in Dubai on Sunday.

Ronaldo also took to Twitter to express his joy and pride in receiving the accolade.

“Couldn’t be happier with tonight’s award! As I’m about to celebrate my 20th year as a professional footballer, Globe Soccer Player Of The Century is a recognition that I receive with so much joy and pride,” Ronaldo Tweeted.

Both Ronaldo and Messi had missed out on men’s player of the year as that went to Bayern Munich forward Robert Lewandowski for the first time this year.  source : the daily star