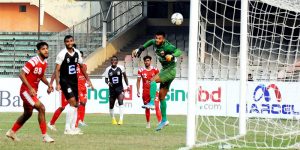 Mohammedan Sporting Club has kept the hope alive for the quarterfinals of Federation Cup football as the team registered a 4-1 win over Bangladesh Muktijoddha Sangsad Krira Chakra on Sunday at Bangabandhu National Stadium, Dhaka.

Winning the match against Muktijoddha, the traditional black and white jersey gathered full three points. Dhaka Abahani from the same group too has three points and that way both the teams are at the top place of the three-team group and in better position for qualifying to the quarterfinals.

Muktijoddha, the all reds, is at the bottom of the table with zero point yet the club still has chance to alter the fate in the next match also the group’s last match against Abahani.

The fate of the group tops will be decided in the last match which is scheduled to be played o the 30th of December at 5:45 PM at the same venue.

On Sunday, Muktis could go ahead in the 27th minute if a shot of Cameroon striker Bekamenga had found the net.

Mohammedan striker Aminur Rahman Sajib had the golden opportunity to score in the 33rd minute when the ball was dropped right before him after slipping hands of Muktijoddha custodian yet to the striker failed the fans.

The black and white outfits succeeded in opening the net in the 42nd minute after they were awarded a free kick for their Nigerian midfielder Abiola Nurat was tackled downed by Muktis defender near the D-box. Local midfielder Habibur Rahman Shohag didn’t miss the chance to take the lead.

The all reds levelled the margin in the 68th minute when their Uzbekistan striker Akbarali Kholdarov sent a cross of defender Sujan Miah into the post with a precise header.

73rd minute, a quick Muktijoddha midfielder Tarikul Islam rose the hope of fans high as he rushed near the danger zone yet his attempt of

The fans kept cheering loud for the booters and the booters certainly returned the flavour in the next few minutes.

Black and white fans celebrated the second lead in the 76th minute when defender Atikuzzaman converted a corner of midfielder Habibur Rahman Shohag with a header.

The black and white outfits sealed the fate of the 4-1 match as Nigerian midfielder Nurat fired opponent post in the 83rd minute of the match.

Now, defending champion Bashundhara Kings will face off Chittagong Abahani on Monday at 5:00 PM in a Group-C match.