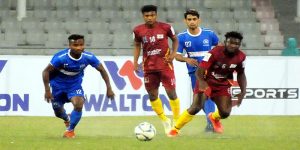 Uttara Baridhara boys had won a 3-2 match against Arambagh Krira Sangha in the ongoing Federation Cup football, sponsored by Walton, on Saturday at the Bangabandhu National Stadium in Dhaka.

Riding on single goals of Scorer Suman, Sujan and Mustafa, The Baridhara boys found their first win in the group round of the match. Nigerian Striker Chizoba and local striker Nahid reduced the margin for Arambagh scoring one goal each.

Uttar Baridhara boys started their season with a 3-0 defeat to another rival of group Saif Sporting Club. But they certainly recovered in the second match with the win. Arambagh, on the on the other hand had a 2-0 win over Brother Union in the first match.

Thus, the calculation for this group became complex. Saif, Arambagh and Uttar Baridhara all three are having three points each and their next match results will tell which two will get tickets to the quarterfinals.

Now, Mohammedan Sporting Club will engage with Bangladesh Muktijoddha Sangsad Krira Chakra in a Group-D match Sunday at 3:15 PM while Bangladesh Police Football Club will meet Sheikh Jamal Dhanmondi Club in a Group-A match at 5:45 PM at the same venue.