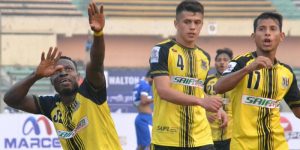 Although Saif boys won the match the goal margin would be bigger if they could utilise all the chances they had. Small fry Uttar Baridhara with a better 5-3-2 formation made them quite tensed before the short whistle.

The team apparently missed their star midfielder Jamal Bhuiyan who is set to play for I-League club Kolkata Mohammedan, on loan from Saif.

Saif SC, the fourth placer of BPL 2018-19, went ahead in the 49th minute following an own-goal of Uttar Baridhara’s Egyptian defender Mahmoud Sayed who mistakenly put the ball home.
Their second goal came from an effort of Nigerian striker Kenneth Ikechukwu while the third goal was netted by local striker Foysal Ahmed Fahim in the 70th minute.

The newly appointed Belgian coach Paul Put certainly succeeded his first mission with the win on the day.

On Thursday, Sheikh Russel Krira Chakra and Bangladesh Police Football Club will play the first match at 4:45 pm while Mohammedan Sporting Club and Dhaka Abahani will face off in the second match at 7:15 pm at the same venue.