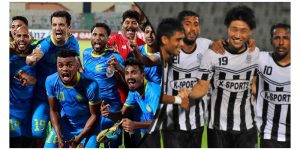 Dhaka Abahani and Mohammedan Sporting Club are facing off in their famous rivalry the Dhaka Derby in the Federation Cup football on Thursday at 7:15 pm at Bangabandhu National Stadium in Dhaka. Once, during those matches, the Dhaka Stadium area and galleries would be flooded with hundreds and thousands of spectators. Dhaka Derby is one of the main attractions of Dhaka football. Whether it is a league or any other event, the two archrivals had successfully drawn the attention of the local football fans for a few decades. To this day, a few thousand diehard supporters of the two clubs keep up to date with matters of their favourite clubs and still show up at the galleries on the very derby match days. In reality, these few are keeping the arch rivalry alive now. During the two teams last faced off in a match of Bangladesh Premier League in the fourth of March this year, Abahani defeated Mohammedan by 4-0 margin. However, Mohammedan had a same margin win over the opponent in the 2019 BPL on the 16th of July in 2019. The fans will be waiting to see what these two do in this Federation Cup.