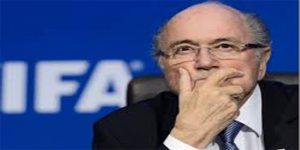 FIFA has filed a criminal complaint against former president Sepp Blatter over the finances of its loss-making soccer museum in Zurich.

Soccer’s governing body said on Tuesday it suspected “criminal mismanagement by FIFA’s former management and companies appointed by them” to work on the museum — long seen as a pet project of Blatter’s — in a renovated and rented city center building.

The FIFA World Football Museum opened in 2016 after $140 million of soccer money was spent refurbishing the 1970s office building to also include 34 rental apartments.

It was meant to open around May 2015, when Blatter won a fifth presidential election, but was delayed until after he left office amid pressure from American and Swiss investigations of international soccer officials.

FIFA said its criminal complaint following an external audit of the project was delivered by hand to canton (state) prosecutors in Zurich.

“That audit revealed a wide range of suspicious circumstances and management failures, some of which may be criminal in nature and which therefore need to be properly investigated by the relevant authorities,” FIFA deputy secretary general for administration Alasdair Bell said in a statement.

Blatter’s lawyer, Lorenz Erni, said in a statement: “The allegations are baseless and are vehemently denied.”

Blatter risks investigation at local level while already a suspect in two criminal proceedings opened by federal prosecutors into how he spent FIFA’s money as president.

“Given the massive costs associated with this museum, as well as the general way of working of the previous FIFA management, a forensic audit was conducted in order to find out what really happened here,” Bell said.

The museum has made a loss each year including $50 million in 2016 that included one-off costs, FIFA said then in its financial report.

The most recent FIFA accounts for 2019 show almost $3.5 million revenue from the FIFA World Football Museum and $6.3 million costs for “investment and expenses.” There was a record 161,700 visitors at the Zurich building last year. UNB