Playing well is the motto 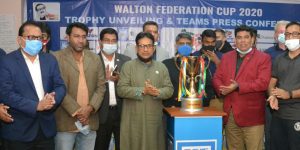 The season opening event Federation Cup football is rolling on Tuesday while, apart from the top three, all the mid level and bottom lining teams expressed their interest in playing well, giving a good fight and challenging the top powers. The coaches, players and officials of these clubs talked to media on Monday at a briefing session at the BFF House.

Bashundhara Kings, Dhaka Abahani and Sheikh Russel KC officials and coaches said they were eyeing the title of Federation Cup.

Saif Sporting Club was fourth in BPL yet was eliminated from the Fed Cup quarters last time. Its Belgian head coach Paul Put described how the sporting arenas worldwide had suffered from the Pandemic and how football in the country was affected as well. He said, “We will try to do better than the last season.”

Sheikh Jamal Dhanmondi Club Head coach Shafiqul Islam Manik said, “Sk Jamal is a giant team. The same team from last season will play this year. We had training sessions for a few days. We have good team morale right now. We are in a group of strong rivals and will need full effort to survive it. Our primary target is playing the quarter finals and will advance gradually.

Arambagh Krira Sangha Indian coach Subrata Bhattacharya said, “We had one and half month training. We are hoping for a Good performance.

Mohammedan SC English Head Coach Sean Lane said that most of his players were young and he got a few good foreigners. With a balanced team, he had beliefs of a good fight in the coming events.

The trophy of Federation Cup football was unveiled in a colourless programme at the BFF House on the day where BFF senior vice-president Abdus Salam Murshedy, sponsor Walton Executive Director FM Iqbal Bin Anwar Dawn and BFF executive members along with officials of participating clubs were present.