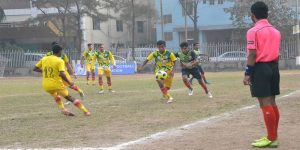 No goal was scored in all two matches played on Sunday in the final round of the eight-team National School Football Tournament 2019-20.

All the matches ended in a goalless draw at the Paltan Maidan Outer Stadium.

Ishaque of Chagalnaiya High School was adjudged the man of the match.

In the day’s second match, Tangail’s Suti GM Pilot High School split points with Daudpur Multilateral High School of Dinajpur, in a goalless match, at the same venue in the afternoon.

Azim of Suti Pilot High School was named the best player of the match.

Eight teams, split into two groups, are taking part in the final round of the tournament, taking place from December 18 to 23.