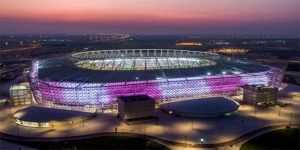 Qatar inaugurated its latest stadium on Friday for the 2022 World Cup with a half-capacity 20,000-strong crowd who had all tested for the coronavirus or antibodies beforehand but with minimal social distancing.

The launch of the Ahmad Bin Ali stadium, 24 kilometres (15 miles) west of the capital Doha, marks one of the largest sports gatherings anywhere in the world since the start of the pandemic. AFP

In New Zealand, more than 20,000 fans attended the Super Rugby Aotearoa six days after the country declared itself Covid-free. Similar numbers are attending some National Football League games in the US despite surging infections and deaths.

Fans were able to apply for tickets to Friday’s event if they either tested positive for virus antibodies, or tested negative for Covid-19 at accredited clinics in the days before the opening.

Organisers said 10,000 seats would be reserved for each category at the ground which until Friday was known as the Rayyan Venue.

Qatari IT consultant Ahmed al-Beharri, 25, said “it was proof we are capable of organising the big events”.

“It’s been a long time since I’ve been with so many people,” he told AFP.

“I never thought it would be possible to have 20,000 people at an event like this.”

The 40,000-seat ground, which will host seven matches during Qatar 2022 up to and including the round of 16 stage, hosted the domestic Emir Cup final as its inaugural match.

“Even with a physically distanced crowd, I could feel the passion of the fans,” said Infantino. The event coincided with Qatar National Day which, in two years, will be the date of the World Cup final.

Despite strict rules inside the stadium mandating masks, assigning seats, and a ban on eating, social distancing was absent in the fan zone before kick-off.

Thousands of spectators, some un-masked, flocked around a stage to watch breakdancing and Bollywood renditions while a compere unsuccessfully encouraged social distancing.

“In theory, no one should have it (COVID-19),” said one organiser as he headed into the stadium ahead of the game.

Inside, white crosses closed off seating while green ticks indicated places open for fans who mostly respected the rules although some clustered behind the goals.

“I felt very safe. They had us sit with one seat empty between us to have social distancing and minimise risk of contagion,” said Valentina, a Venezuelan student.

“The risk of infection was reduced to a minimum.”

Qatar has slowly been welcoming fans back to stadiums, permitting attendances of up to 30 percent in the top-flight Qatar Stars League.

Qatar, which has tested 43 percent of its 2.75 million population, has recorded 141,716 infections since the beginning of the pandemic with the high rate attributed to aggressive testing and unsanitary accommodation for workers.

Ahead of the match, a skin on the stadium’s facade glowed with a range of colourful motifs suggestive of Qatari themes including family, the desert, and local flora and fauna.

The light show on the stadium, built by Indian construction giant Larsen and Toubro and a local partner, is framed by a latticework exoskeleton.

In addition to Ahmad Bin Ali, Qatar has so far inaugurated new-build Al-Janoub and Education City stadiums alongside the refurbished Khalifa ground.

World Cup 2022 chief executive Nasser al-Khater said recently that all the stadiums should be complete by the end of 2021 or at the beginning of 2022.

Khater called the launch “another opportunity to test our readiness for Qatar 2022”.