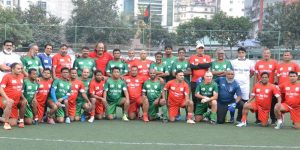 A friendly football match between the red team and the green team was held on the artificial turf of the BFF building at Motijheel today on the occasion of the Great Victory Day on 16 December 2020 with the participation of former football players under the overall management of the Bangladesh Football Federation.

The red team won the match by 3-0 goals. In which Zakir scored 1 (one) and Khokon Das scored 2 (two) goals. Both teams (red team and green team) were awarded trophies and medals.

Also present were former players of the national football team.