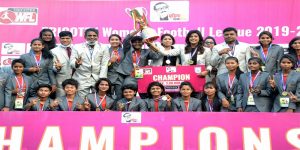 The final match of ‘Tricotex Women’s Football League 2019-20’ under the management of Bangladesh Football Federation was held today on 13th December 2020 at 2:00 pm at Birshreshtha Shaheed Sipahi Mohammad Mustofa Kamal Stadium in Kamalapur.

Bashundhara Kings became the champion in that league. The champion team was given a champion trophy, medal and a cheque for 3 (three) lakh taka for prize money.

Nasreen Football Academy is chosen to be runners-up in that league. The runners-up team was given a cheque for Rs 2 lakh for trophy, medal and runners-up money.