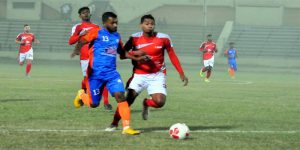 The first tournament of the new football season, the curtain-raiser Federation Cup Football, will begin from December 22 at Bangabandhu National Stadium in the city.

Most of the clubs are passing busy time to make them prepare for the first tournament of this season.

The Federation Cup is generally considered as a preparatory tournament for the professional league. After the formation of the new team, what kind of strength, where the team’s weakness, all these are tested in the Federation Cup.

But this time the context is different. The footballers will play in their old club because the Bangladesh Premier League was abandoned midway last season due to the coronavirus pandemic. That’s why the strength of the clubs in the abandoned season will be the same as in the new season.

Bashundhara Kings clinched their maiden title of the last season of the Federation Cup.

In the final, they defeated Muslim Friends Society 2-1 to clinch the title of the Federation Cup. Abahani could not reach the semifinal of the last Federation Cup when Rahmatganj showed Abahani the exit door in the tournament by beating them 4-3 in penalty shootout in the quarterfinal.

The traditional old Dhaka ‘outfit’ Rahmatganj then stunned another giant Mohammedan by reaching the last Federation Cup final after handing the Motijheel outfit by a solitary goal defeat in the first semi-final.

Many clubs also kept respect for Rahmatganj in their mind because Rahmatganj were the runners-up of last year’s Federation Cup. However, the performance of the field will change all the calculations. Those who will be able to play well, the first trophy of the season will go to their home.