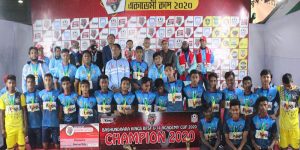 Bangladesh Olympic Association deputy secretary general Asaduzzaman Kohinoor was the chief guest in the final and handed over the cash prize and trophy.

The champions receive Taka one lac while the runners-up got Taka fifty thousand as prize money in addition trophies. Besides, best player, highest scorer and best player in position were also awarded.

Earlier, on way to the final, FC United Feni blanked Shamnagar Football Academy of Feni by 3-0 goals after leading the first half by 2-0 goals in the first semifinal.

While Warriors Sports Academy beat Iswarganj Football Academy of Mymensingh also by the same identical margin of 3-0 goals after dominating the first half by 2-0 goals in the second semifinal.

A total of twelve academy teams took part in the nine-day-meet, organised by BFSF and sponsored by Bashundhara Kings.