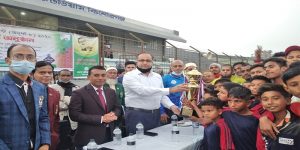 Azimuddin Alo Football Academy has won the title of Academy Cup Football (Under-7) in Kishoreganj. In the final, they defeated Shaheed Syed Nazrul Islam Smriti Sangsad by 3-4 goals in a tiebreaker. The match was a goalless draw at the scheduled time.

The competition was organized by the Kishoreganj District Sports Office under the annual sports program of the Directorate of Sports under the Ministry of Youth and Sports. Azimuddin Alo Football Academy goalkeeper Tousif was the best player in the final match. Mahfuz of the same team has been the best in the tournament. Eight academies of Kishoreganj district took part in the tournament.

Kishoreganj District Sports Officer Al-Amin informed that a month-long training will be organized for the 30 players selected from here. Besides, Mia Bhai informed about the 15-year plan with the talented players selected from the training. Kishoreganj district administration, district football association and Mia Bhai Foundation were in overall cooperation in organizing the event.