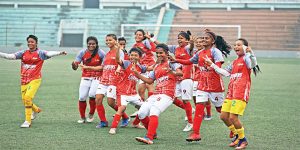 After scooping the Bangladesh Premier League in their debut season in top-flight men’s football, Bashundhara Kings have now won the title of women’s league on debut.

The Sabina Khatun-led side confirmed their title with a game in hand following a 13-1 win over Jamalpur Kacharipara Ekadash at the Birshreshtha Mostafa Kamal Stadium in Kamalapur sunday.

Sabina led the onslaught with five goals while five other players got their names on the scoresheet as the starstudded side notched their 11th win in 11 matches.