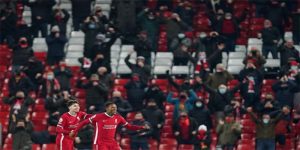 Liverpool turned on the style for their returning fans on Sunday, beating Wolves 4-0 to join Tottenham at the top of the Premier League after another episode of the Son Heung-min and Harry Kane show.

Jurgen Klopp’s men had not had the chance to play in front of their supporters since they ended their 30-year wait to be crowned English champions but made up for lost time.

“You’ll Never Walk Alone” rang out around Anfield as 2,000 home fans — the maximum allowed under coronavirus rules — witnessed strikes from Mohamed Salah, Georginio Wijnaldum, Joel Matip and an own goal.

Liverpool and Wolves both looked dangerous on the counter-attack in the early stages of the late game at Anfield, with the home side taking the lead when Salah capitalised on an error by Wolves captain Conor Coady.

Wijnaldum made it 2-0 with a wonderful curled finish shortly before the hour mark and Matip put the game beyond Wolves with a close-range header before the late own goal from Nelson Semedo.

Liverpool have now won 31 of their past 32 home league games, scoring 93 goals while conceding just 25.

“The game, the atmosphere, it was so nice I had goosebumps,” an emotional Klopp told the BBC. “They started ‘You’ll Never Walk Alone’ — really nice. I never knew it could feel that good.

“This started in February and we were waiting to get normality back. Normality is good — I don’t think we appreciated it as much. It was very, very touching.” – Deadly duo –

The Spurs-Arsenal match was dominated by Son and Kane, who have shredded defences this season.

Tottenham took the lead in the north London derby in the 13th minute with a wonder goal from the South Korean, who curled a brilliant long-range effort into the top corner after being set free down the left by Kane.

The home side, also playing in front of fans, doubled their lead on the stroke of half-time as they took apart their local rivals on the break.

Giovani Lo Celso played in Son, who returned the earlier favour to tee up Kane to smash in from close range.

Son and Kane have now combined for 31 Premier League goals, the second most of any pair after Chelsea’s Didier Drogba and Frank Lampard (36).

Tottenham, who have not lost a league match since the opening day of the season, now have 24 points after 11 matches, level with Liverpool and two clear of Chelsea.

Mourinho praised his star forwards for their all-round contribution.

“Harry Kane clearing balls in the box, Sonny for the first 60 minutes as a winger and then a second striker — it is not just about scoring goals and being world-class players,” he told Sky Sports. “It is about being great guys and doing your best for the team.

Arsenal, by contrast, are now 15th in the Premier League following their sixth defeat of the season, and struggling badly for goals.

Leicester ended a four-game winless run in all competitions at an empty Bramall Lane to push the Blades closer to a return to the Championship.

Clubs in tier-three areas of England, with tougher coronavirus restrictions, still have to play behind closed doors, while tier-two zones such as London and Liverpool can have crowds of up to 2,000.

Jamie Vardy kept his cool when through one-on-one and beat Aaron Ramsdale with a confident right-foot finish in the 90th minute.

Ayoze Perez had put Brendan Rodgers’s men in front before Oli McBurnie headed an equaliser for Sheffield United, who now have just one point from 11 games.

In the first match of the day, Wilfried Zaha and Christian Benteke both scored twice as Crystal Palace made West Brom pay for Matheus Pereira’s first-half red card in a 5-1 rout at the Hawthorns. BSS/AFP